"I say then, have they (the Jewish people) stumbled that they should fall? Certainly not! But through their fall, to provoke them to jealousy (so that they may be saved), salvation has come to the gentiles" - Romans 11:11

Thought for the week

Then Jesus declared, "I am the bread of life. Whoever comes to me will never go hungry, and whoever believes in me will never be thirsty."- John 6:35 NIV

Isaiah 62:6-7: “I have set watchmen on your walls, O Jerusalem; they shall never hold their peace day or night. You who make mention of the Lord, keep not silent, and give Him no rest, till He establishes, and till he makes Jerusalem a praise in the earth”

Today, Friday 22nd May, corresponding to the 28th day of the Hebrew month ‘Iyar’, Jews in Israel and all over the world are commemorating ‘Yom Yerushalayim’ (Jerusalem Day) which is a national holiday in Israel. For Israel this is a great and joyous occasion as ‘Yom Yerushalayim’ marks the Israeli liberation of East Jerusalem in 1967 and the subsequent unification of the city of Jerusalem. This year marks the 53rd anniversary of the liberation of East Jerusalem and the ‘Kotel’ (Western Wall).

Jerusalem is no ordinary city. In fact Jerusalem is mentioned 814 times in the King James Version of the bible.

There is also much contention over Jerusalem as all three major religions, Judaism, Christianity, and Islam, view Jerusalem as a holy city and each lays claim to it.

It is, in fact, a holy city and we see from scripture that Jerusalem is G-d’s chosen city and is known as the ‘City of G-d’.

2 Chronicles 6:6 declares: “Yet I have chosen Jerusalem, that My name may be there; and I have chosen David to be over My people Israel.”

Psalm 46:4 declares: “There is a river whose streams shall make glad the city of God, the holy place of the tabernacles of the Most High.”

Jerusalem is known as:

Princess among the provinces (Lamentations 1:1)

Jerusalem is ‘the perfection of beauty and the joy of the whole earth’.

Lamentations 2:15 declares: “All who pass by clap their hands at you; they hiss and shake their heads at the daughter of Jerusalem: “Is this the city that is called ‘The perfection of beauty, the joy of the whole earth’?””

Psalm 48:2 declares: “Beautiful in elevation, the joy of the whole earth, is Mount Zion, on the sides of the north, the city of the great King.”

Another reason that Jerusalem is so unique and so significant is that it is the city in which G-d’s ultimate plan for mankind – mankind’s salvation - came about. For it is in Jerusalem that Yeshua was crucified, taking mankind’s sin upon Himself.

It was in Jerusalem that Yeshua died and rose again guaranteeing those who commit their lives to Him everlasting life in heaven; and it was from Jerusalem that He ascended into heaven to be seated at the right hand of the Father and raised those who are believers in Him to be seated together with Him in heavenly places - Ephesians 2:6: “And He raised us up together, and made us sit together in heavenly places in Christ Jesus.”

And of course, the best news regarding Jerusalem is that the Messiah, Yeshua, will return in glory to Jerusalem, the city of our G-d - Zechariah 14:3-5: “Then the Lord will go forth, and fight against those nations, as He fights in the day of battle. And in that day His feet will stand on the Mount of Olives, Which faces Jerusalem on the east. And the Mount of Olives shall be split in two, from east to west, making a very large valley; half of the mountain shall move toward the north, and half of it toward the south…thus the Lord my God will come, and all the saints with You.”

So as we at Emet Ministries, together with the State of Israel and Jews all over the world, celebrate ‘Yom Yerushalayim’, let us be ‘the watchmen on the walls’ and honour the words written by David in Psalm 122:6: and “pray for the peace of Jerusalem”; the peace that will come about when the Jewish ‘Mashiach’ (Messiah), Yeshua, will return to Jerusalem, set up His Kingdom, and bring peace to Jerusalem, to Israel, and to the rest of the world.

“Pray for the peace of Jerusalem: “May they prosper who love you. Peace be within your walls, prosperity within your palaces.””

Words from our leadership

Jewish people are not just 'another people group'; they are the most strategic people group.

And that the remission of sins should be preached in His Name to all nations, beginning at Jerusalem...

For I am not ashamed of the gospel of Christ for it is the power of God to salvation for everyone who believes, for the Jew first and also for the Greek..

For by Grace you have been saved through faith, and that not of yourselves; it is a gift of God, not of works, least anyone should boast... 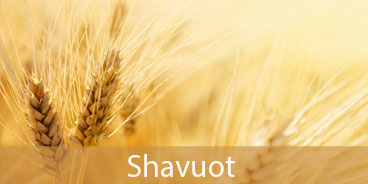 ‘Shavuot’, the Feast of the Weeks, is the Jewish holiday celebrating the harvest season in Israel. ‘Shavuot’, which means ‘weeks’, refers to the timing of the festival which is held exactly 7 weeks after Passover.

It is celebrated according to the biblical command given in Exodus 34:22: “And you shall observe the Feast of Weeks, of the firstfruits of wheat harvest, and the feast of ingathering at the year's end.”

Word for the Day

11 I will remember the works of the Lord;Surely I will remember Your wonders of old.12 I will also meditate on all Your work,And talk of Your deeds.13 Your way, O God, is in [a]the sanctuary;Who is so great a God as our God?14 You are the God who does wonders;You have declared Your strength among the peoples.15 You have with Your arm redeemed Your people,The sons of Jacob and Joseph. Selah

We have 85 guests and no members online