"I say then, have they (the Jewish people) stumbled that they should fall? Certainly not! But through their fall, to provoke them to jealousy (so that they may be saved), salvation has come to the gentiles" - Romans 11:11

Thought for the week

Then Jesus declared, "I am the bread of life. Whoever comes to me will never go hungry, and whoever believes in me will never be thirsty."- John 6:35 NIV

Home‘Sukkot’ and the Coming of ‘Moshiach’

‘Sukkot’ and the Coming of ‘Moshiach’

We are now in the time of the last days when both Jews and Christians are awaiting the return of the ‘Moshiach’ (Messiah). Many believe that this will take place during the festival of ‘Sukkot’, however no one really knows the day or the hour.

Many Christians also celebrate the Feast of Tabernacles in various celebration events around the world.

They do this in accordance to the scripture quoted in Zechariah 14:16 which declares:  “And it shall come to pass, that every one that is left of all the nations which came against Jerusalem shall even go up from year to year to worship the King, the Lord of hosts, and to keep the feast of tabernacles.”

It is important to realize that this scripture actually refers to the time of the return of the Messiah. Why do I say this? Well, let’s have a look at Zechariah 14 which begins with the words: “Behold, the day of the LORD is coming, and your spoil will be divided in your midst.”

So, clearly this is referring to the ‘day of the L-rd’s return’.

Verses 3-4 continue: “Then the LORD will go forth and fight against those nations, as He fights in the day of battle. And in that day His feet will stand on the Mount of Olives, which faces Jerusalem on the east.”

This makes reference to the day when all the surrounding Arab nations, together with Magog (thought to be Russia), attack Israel and the L-rd returns to Jerusalem – to the Mount of Olives – to battle against Israel’s enemies.

This makes reference to the utter destruction that the L-rd will inflict on Israel’s enemies at that time.

Then verses 15-16 declares: “Such also shall be the plague on the horse and the mule, on the camel and the donkey, and on all the cattle that will be in those camps. So shall this plague be. And it shall come to pass that everyone who is left of all the nations which came against Jerusalem shall go up from year to year to worship the King, the LORD of hosts, and to keep the Feast of Tabernacles.”

This clearly shows that this refers to the time when the Messiah, Yeshua, sets up His Kingdom and rules and reigns from Jerusalem; and those who are left from the nations who came against Israel will go to Jerusalem every year to worship the L-rd of Hosts and keep the Feast of Tabernacles.

Such is the importance of ‘Sukkot’, that it is the one feast that will be kept when Yeshua sets up His Kingdom here on earth.

So, what does this mean for Jews and Gentiles?

If you are a born again follower of Yeshua, it is a time to look forward to; a time of rejoicing. However, this is not so for those who have not come to faith in Yeshua.

This is why the church cannot be apathetic in taking the gospel to all people - beginning with the Jewish people.

Most Jewish people living now are not saved and face an eternity apart from G-d.

This is why the church needs to fulfill its G-d given mandate to “provoke the Jewish people to jealousy so that they may be saved”.

Here is the good news: Zechariah 12:10 tells us: “And I will pour on the house of David and on the inhabitants of Jerusalem the Spirit of grace and supplication; then they will look on Me whom they pierced. Yes, they will mourn for Him as one mourns for his only son, and grieve for Him as one grieves for a firstborn.”

When Yeshua returns to Jerusalem, my people will, as a nation, come to salvation as they recognise that the ‘Moshiach’ they are waiting for is indeed Yeshua.

This fulfills Romans 11:25-27: “For I do not desire, brethren, that you should be ignorant of this mystery, lest you should be wise in your own opinion, that blindness in part has happened to Israel until the fullness of the Gentiles has come in. 26 And so all Israel will be saved, as it is written: “The Deliverer will come out of Zion, And He will turn away ungodliness from Jacob; 27 For this is My covenant with them, When I take away their sins.”

This does not mean that every Jew will be saved at that time, but the majority will be.

However, we cannot neglect the Jewish people who will die between now and the return of Yeshua.

I urge all Messianic Jews, as well as Christians who know Jewish people, to give them the gospel, the good news of salvation.

It’s vital that the seeds of salvation are planted in their hearts and minds.

In fact, as the Body of Christ, you should be fervently taking the gospel to all people, thus fulfilling the ‘Great Commission’…you have no excuse!

Let us all, Jews and Gentiles, publicly stand together with the Jewish people and Israel and pray for the “Peace of Jerusalem” - looking forward to the “blessed hope and glorious appearing of our great God and Saviour”, Yeshua – the Messiah that both Jews and Gentiles are waiting for.

Words from our leadership

Jewish people are not just 'another people group'; they are the most strategic people group.

And that the remission of sins should be preached in His Name to all nations, beginning at Jerusalem...

For I am not ashamed of the gospel of Christ for it is the power of God to salvation for everyone who believes, for the Jew first and also for the Greek..

For by Grace you have been saved through faith, and that not of yourselves; it is a gift of God, not of works, least anyone should boast... 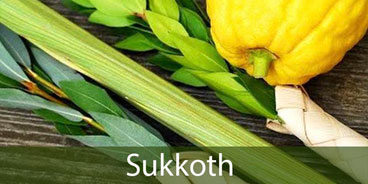 “...On the fifteenth day of the seventh month is the Festival of Sukkoth, seven days for the Lord.” - Leviticus 23:34

At sunset on the 20th September 2021, corresponding to the 14th day of the Hebrew month of ‘Tishrei’, Jews all over the world will begin celebrating the festival of ‘Sukkoth’.

Word for the Day

God the Help of Those Who Seek Him

PS 121 I will lift up my eyes to the hills—
From whence comes my help?
2 My help comes from the Lord,
Who made heaven and earth.
3 He will not allow your foot to be moved;
He who keeps you will not slumber.
4 Behold, He who keeps Israel
Shall neither slumber nor sleep.
5 The Lord is your keeper;
The Lord is your shade at your right hand.
6 The sun shall not strike you by day,
Nor the moon by night.
7 The Lord shall preserve you from all evil;
He shall preserve your soul.
8 The Lord shall preserve your going out and your coming in
From this time forth, and even forevermore.

We have 346 guests and no members online