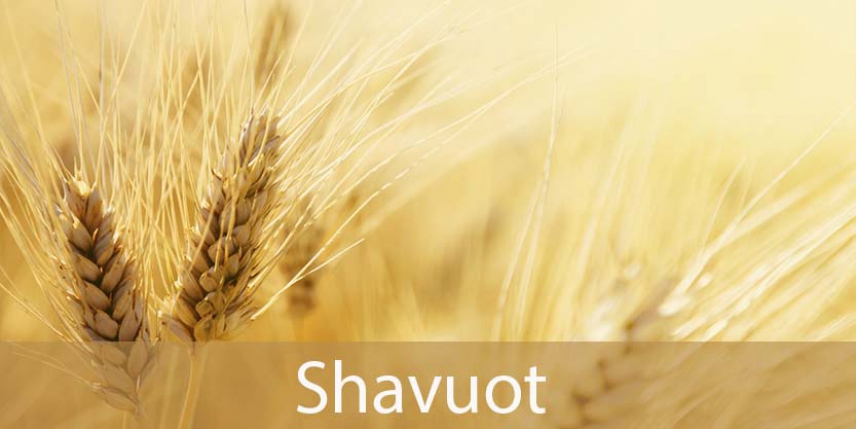 On the evening of the 16th May, corresponding to the 5th day of the Hebrew month of Sivan, Jewish people all over the world will begin celebrating the festival of ‘Shavuot’.

‘Shavuot’, the Feast of the Weeks, is the Jewish holiday celebrating the harvest season in Israel. ‘Shavuot’, which means ‘weeks’, refers to the timing of the festival which is held exactly 7 weeks after Passover.

It is celebrated according to the biblical command given in Exodus 34:22: “And you shall observe the Feast of Weeks, of the firstfruits of wheat harvest, and the feast of ingathering at the year's end.”

‘Shavuot’ is known also as ‘Yom Habikurim’ (the Day of the First Fruits) because it is the time the farmers of Israel would bring their first harvest to Jerusalem as a token of thanksgiving. In fact, this holiday is known by several names: It is called ‘Chag HaShavuot’ (the Festival of Weeks), concluding seven weeks from Passover; ‘Z'man Matan Torateinu’ (the Giving of the ‘Torah’); ‘Chag HaBikurim’ (the Festival of the First-Fruits) and ‘Chag Hakazir’ (the Festival of the Harvest).
The ‘Shavuot’ holiday is alive with flowers and greenery, highlighted by ‘Torah’ study, and flavored with the taste of milk and honey. It is a ‘Shavuot’ tradition to adorn the synagogue and the home, with greenery, fragrant flowers, leaves, boughs and trees. It is a joyous festival that includes many delectable foods such as: Milk and Honey, cheesecake and ‘blintzes’, a rolled pancake filled with cheese.

This holiday is known by Christians as Pentecost. While there are other references to Pentecost in the New Testament, the most significant reference is found in Acts 2:1-4: “When the day of Pentecost had fully come, they were all with one accord in one place. And suddenly there came a sound from heaven as of a rushing mighty wind, and it filled the whole house where they were sitting.  Then there appeared to them divided tongues, as of fire, and one sat upon each of them. And they were all filled with the Holy Spirit, and began to speak with other tongues, as the Spirit gave them utterance.”

The New Testament writers associate the events of Acts 2 with Pentecost, and relate it to the prophecies of Joel 2 and promises of Jesus in Acts 1:8. In both, the emphasis is on the empowerment of born again Christians through the Holy Spirit, to enable the people of G-D to be a “Light to the World.”

To conclude, for both Jewish people and Christians, ‘Shavuot’ is a very special and blessed time.

We at Emet Ministries take this opportunity to wish Jewish people all over the world:

Last modified on Friday, 14 May 2021 16:20
Rate this item
(0 votes)
Read 1802 times
Tagged under
Tweet
More in this category: « Yom Hashoah, Yom Hazikaron and Yom Ha’atzmaut Rosh Hashanah »
back to top